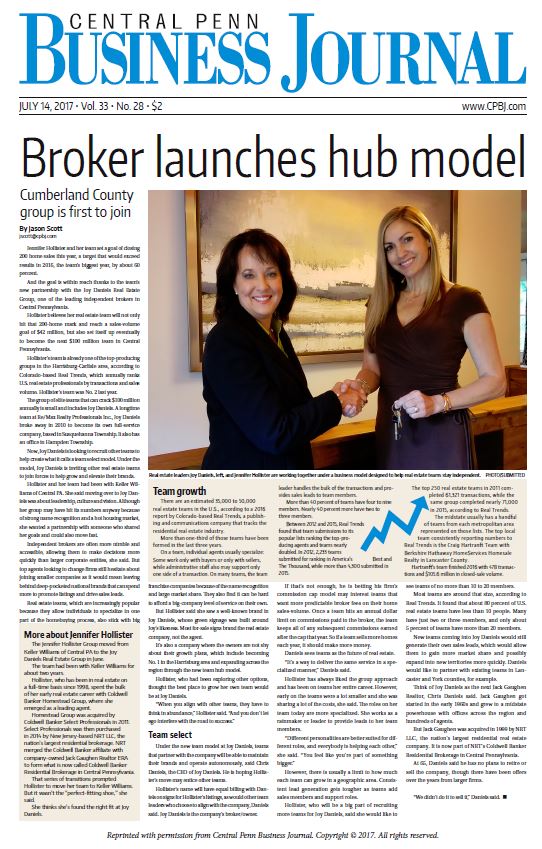 Jennifer Hollister and her team set a goal of closing 200 home sales this year, a target that would exceed results in 2016, the team's biggest year, by about 60 percent.

And the goal is within reach thanks to the team’s new partnership with the Joy Daniels Real Estate Group, one of the leading independent brokers in Central Pennsylvania.

Hollister believes her real estate team will not only hit that 200-home mark and reach a sales-volume goal of $42 million, but also set itself up eventually to become the next $100 million team in Central Pennsylvania.

Hollister’s team is already one of the top-producing groups in the Harrisburg-Carlisle area, according to Colorado-based Real Trends, which annually ranks U.S. real estate professionals by transactions and sales volume. Hollister’s team was No. 2 last year.

The group of elite teams that can crack $100 million annually is small and includes Joy Daniels. A longtime team at Re/Max Realty Professionals Inc., Joy Daniels broke away in 2010 to become its own full-service company, based in Susquehanna Township. It also has an office in Hampden Township.

Now, Joy Daniels is looking to recruit other teams to help create what it calls a team select model. Under the model, Joy Daniels is inviting other real estate teams to join forces to help grow and elevate their brands.

There are an estimated 35,000 to 50,000 real estate teams in the U.S., according to a 2016 report by Colorado-based Real Trends, a publishing and communications company that tracks the residential real estate industry.

More than one-third of those teams have been formed in the last three years.

On a team, individual agents usually specialize: Some work only with buyers or only with sellers, while administrative staff also may support only one side of a transaction. On many teams, the team leader handles the bulk of the transactions and provides sales leads to team members.

More than 40 percent of teams have four to nine members. Nearly 40 percent more have two to three members.

Between 2012 and 2015, Real Trends found that team submissions to its popular lists ranking the top-producing agents and teams nearly doubled. In 2012, 2,233 teams submitted for ranking in America’s Best and The Thousand, while more than 4,300 submitted in 2015.

The midstate usually has a handful of teams from each metropolitan area represented on those lists. The top local team consistently reporting numbers to Real Trends is the Craig Hartranft Team with Berkshire Hathaway HomeServices Homesale Realty in Lancaster County.

Hartranft’s team finished 2016 with 478 transactions and $105.6 million in closed-sale volume.

Hollister and her team had been with Keller Williams of Central PA. She said moving over to Joy Daniels was about leadership, culture and vision. Although her group may have hit its numbers anyway because of strong name recognition and a hot housing market, she wanted a partnership with someone who shared her goals and could also move fast.

Independent brokers are often more nimble and accessible, allowing them to make decisions more quickly than larger corporate entities, she said. But top agents looking to change firms still hesitate about joining smaller companies as it would mean leaving behind deep-pocketed national brands that can spend more to promote listings and drive sales leads.

Real estate teams, which are increasingly popular because they allow individuals to specialize in one part of the homebuying process, also stick with big franchise companies because of the name recognition and large market share. They also find it can be hard to afford a big-company level of service on their own.

But Hollister said she saw a well-known brand in Joy Daniels, whose green signage was built around Joy’s likeness. Most for-sale signs brand the real estate company, not the agent.

It’s also a company where the owners are not shy about their growth plans, which include becoming No. 1 in the Harrisburg area and expanding across the region through the new team hub model.

Hollister, who had been exploring other options, thought the best place to grow her own team would be at Joy Daniels.

“When you align with other teams, they have to think in abundance,” Hollister said. “And you don’t let ego interfere with the road to success.”

Under the new team model at Joy Daniels, teams that partner with the company will be able to maintain their brands and operate autonomously, said Chris Daniels, the CEO of Joy Daniels. He is hoping Hollister’s move may entice other teams.

Hollister’s name will have equal billing with Daniels on signs for Hollister’s listings, as would other team leaders who choose to align with the company, Daniels said. Joy Daniels is the company’s broker/owner.

If that’s not enough, he is betting his firm’s commission cap model may interest teams that want more predictable broker fees on their home sales-volume. Once a team hits an annual dollar limit on commissions paid to the broker, the team keeps all of any subsequent commissions earned after the cap that year. So if a team sells more homes each year, it should make more money.

Daniels sees teams as the future of real estate.

“It’s a way to deliver the same service in a specialized manner,” Daniels said.

Hollister has always liked the group approach and has been on teams her entire career. However, early on the teams were a lot smaller and she was sharing a lot of the costs, she said. The roles on her team today are more specialized. She works as a rainmaker or leader to provide leads to her team members.

“Different personalities are better suited for different roles, and everybody is helping each other,” she said. “You feel like you’re part of something bigger.”

The Jennifer Hollister Group moved from Keller Williams of Central PA to the Joy Daniels Real Estate Group in June.

The team had been with Keller Williams for about two years.

Hollister, who has been in real estate on a full-time basis since 1998, spent the bulk of her early real estate career with Coldwell Banker Homestead Group, where she emerged as a leading agent.

That series of transitions prompted Hollister to move her team to Keller Williams. But it wasn’t the “perfect-fitting shoe,” she said.

She thinks she’s found the right fit at Joy Daniels.

However, there is usually a limit to how much each team can grow in a geographic area. Consistent lead generation gets tougher as teams add sales members and support roles.

Hollister, who will be a big part of recruiting more teams for Joy Daniels, said she would like to see teams of no more than 10 to 20 members.

Most teams are around that size, according to Real Trends. It found that about 80 percent of U.S. real estate teams have less than 10 people. Many have just two or three members, and only about 5 percent of teams have more than 20 members.

New teams coming into Joy Daniels would still generate their own sales leads, which would allow them to gain more market share and possibly expand into new territories more quickly. Daniels would like to partner with existing teams in Lancaster and York counties, for example.

Think of Joy Daniels as the next Jack Gaughen Realtor, Chris Daniels said. Jack Gaughen got started in the early 1960s and grew to a midstate powerhouse with offices across the region and hundreds of agents.

But Jack Gaughen was acquired in 1999 by NRT LLC, the nation’s largest residential real estate company. It is now part of NRT’s Coldwell Banker Residential Brokerage in Central Pennsylvania.

At 65, Daniels said he has no plans to retire or sell the company, though there have been offers over the years from larger firms.